Note: Individual tickets and the full Festival schedule will be released on Tuesday, December 8th.

Also, purchasers of the film pass at the early bird price of $90 will be entered into a drawing for a gift basket of Colorado local food products from companies like Pastificio, Savory Spice Shop – Boulder, and Highland Honey.

What You Eat Matters: A Virtual Series on Health and Nutrition 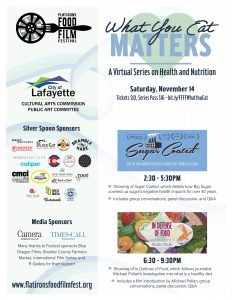 The Flatirons Food Film Festival two-part virtual series on health and nutrition is now available in recorded format until Sunday, November 22, midnight. It consists of two programs. Both include a streaming documentary. One program with Sugar Coated concentrates on the health effects of sugar. The other one with In Defense of Food explores the question of what we should eat to be healthy. Both events include a recording of the panel discussion and Q&A for it.

*We are using the Eventive Virtual Festival for ticketing and viewing films. See our New Online Experience for more information.

The 8th Flatirons Food Film Festival will make you hungry from January 28-February 5, 2021. (The ninth Festival will take place in Fall 2021.)

As a virtual Festival that viewers can attend while safe and warm at home, the festival intends to brighten the dreariness of winter with 10 feature films, three short films programs, discussions, culinary events, and more. This virtual festival will highlight indigenous and underrepresented food cultures with films about:

Other topics include Chef Evan Funke, a master of handmade pasta; a high-tech company growing meat from meat cells; Francois Vatel, master chef during the time of King Louis XIV; and an Australian dynamo who pivoted from high-powered corporate event planning to founding and running a globally influential food waste nonprofit organization.

In addition to its speakers and culinary events, this year’s Festival will continue last year’s new features: a lecture series, a visual art collaboration, and multiple films and events showing concurrently. Using the Eventive Virtual film platform, viewers can tune into and participate in live events or watch the recorded versions later at their leisure over multiple days. With this new functionality, extending the Festival to an unprecedented eight days will give viewers a chance to watch more of what interests them.

We are now using the Eventive Virtual Festival film and livestream platform to present and provide ticketing for our virtual events, including our January 28‑February 5th Festival. Eventive provides an online experience that integrates pre-recorded and live content; you will not have to access films and livestreams manually unless specified to do otherwise for an event.

You can access Eventive through your computer, iPad, iPhone, and television if you have an Apple TV, Roku, Chromecast (3rd gen or later), or a smart TV enabled with AirPlay or Chromecast.  Click the FAQs button for more information on using Eventive.

“Whether we’re talking about unpasteurized Stilton, raw oysters or working for organized crime ‘associates,’ food, for me, has always been an adventure.” – Anthony Bourdain

Help the Flatirons Food Film Festival thrive by making a donation. As a nonprofit, our mission is to provide a learning and entertaining experience for everyone at an affordable price. If you find that valuable and would like to fund our eighth Festival, please donate.